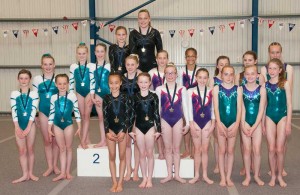 On 14th June WWG gymnasts all came away with medals at the first match of the year in the West Country League, Division 4, held for the 2nd time at West Wilts Gymnastics’ new facility in Trowbridge. 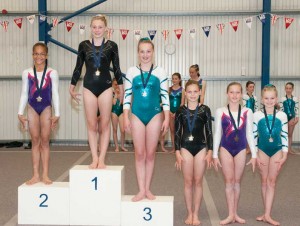 In Round One B League gymnasts took the gold medal as a team out of 4 teams, with Team Captain Catherine Hall being the top scorer on floor, 2nd on vault and bars, and top scorer overall.  Chloe Johnston also came second on beam and fourth overall, and Sophie Johnston 3rd on vault.

In the second round the A League team finished second overall out of 6 teams, despite all 6 gymnasts falling off the beam!  Team Captain Edie Bessant also came 1st on vault and 2nd on bars, finishing 4th overall.  We now need to work on sticking our beam routines for the next match in October so that we can look to win both Leagues for 2015!