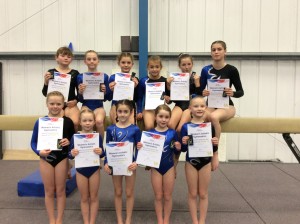 West Wilts Esprit gymnasts once again showed their class at South West Club Grades on Sunday 30th November.  The grading, held at Plymouth Swallows Gymnastics Centre, was the last competition of 2014 for the club and we are delighted to say that all 12 gymnasts who took part achieved a Distinction!  11 WWE gymnasts competed at Grade 14, and all 11 stuck their beam and performed lovely, clean floor routines.  Special congratulations should go to Lucy Heydon, who achieved a score of 61.45 against a pass mark of 45, which was the highest Grade 14 score of the day.  Lucy claimed the top spot against 39 other gymnasts from the South West, and this is the 2nd year running that a WWE gymnast has achieved the highest score at Grade 14, with Chloe Johnston beating 56 other gymnasts at the same competition in 2013. 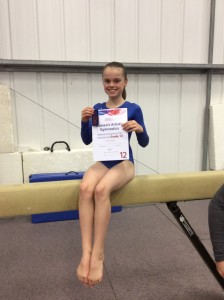 Edie Bessant was WWE’s last performer of the day, and she too achieved a Distinction at Grade 12, despite a fall on beam.  Congratulations to Edie, whose grading was the last in a 4-week run of consecutive competitions for her, and it was great to see her finish on such a high.  This was also Edie’s 3rd Distinction in a row at South West Club Grades, having also gained one at Grade 14 and Grade 13!

Well done to all the gymnasts who took part, and we look forward to even greater things in 2015.  The next competition for WWE will be our own internal Floor and Vault competition in February, followed by National and Compulsory Grades in April.