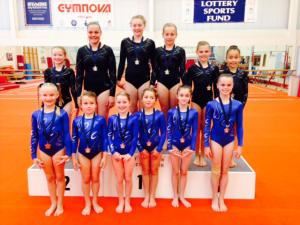 WWG’s A and B Teams did well again at the second match of the year, held at Forest of Dean Gymnastics and Fitness Centre.  Both teams came second, meaning the A Team now have two Silvers overall, and the B Team one Gold and one Silver. 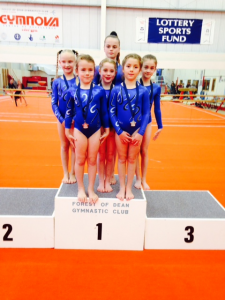 The A Team gymnasts were: Katie Box, Erin Wilkins, Isla Mills, Isabelle Kerbey, Hannah Ovens and Edie Bessant.  The team did well to come second with Team Captain Edie only competing on Beam and Bars due to a knee problem, and with only Edie and Isla sticking their beam routines.  As in the first match, the team could have won Gold if they could only stick all their beam routines! 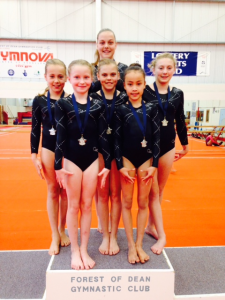 The B Team were: Jessica Richardson, Sophie Johnston, Catherine Hall, Georgia Head, Chloe Johnston and Ashleigh Bygrave.  Despite lovely floor routines and vaults, the B Team had the same problem with only Chloe sticking her beam.  Stick your beam routines and you’ll win, girls!  Special mentions should also go to A Team gymnast Erin Wilkins for her first West Country League representing the Club, and to B Team gymnast Georgia Head for competing her first upstart!