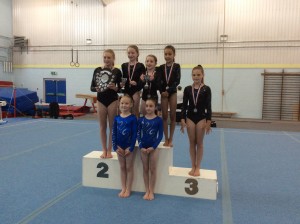 On Sunday June 28th WWG gymnasts did the Club proud again at the Wiltshire Levels Competition.  This is the Wiltshire Championships, which is decided in Levels and by Age.  WWG Elite gymnasts Isla Mills, Jessica Richardson and Catherine Hall became Wiltshire Champions at Level 5 In Age, Level 4 In Age and Level 3 Out of Age respectively, with Elite gymnasts Ashleigh Bygrave and Chloe Johnston finishing close seconds.  This is a record for the Club: the first year we have won three of the possible 6 titles on offer!   In the morning Squad gymnasts Katie Box and Hannah Ovens also performed well at their first Wiltshire Level, Level 5.  Jessica Richardson has also made Club history by winning the Level 5 In Age and Level 4 In Age titles in consecutive years. 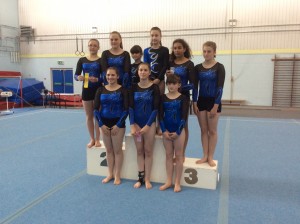 In the second round WWG Grades gymnasts performed lovely floor routines and vaults, but weren’t strong enough on bars and beam to get into the medals.  There were, however, some worthy results: Sophie Johnston achieved the highest vault score at Level 5 Out of Age 13 and 14 years, and the second highest vault score of a Level 5 gymnast all day!  Congratulations also to Molly Howarth, Evie Rowe and Georgia Laver who placed in the top 6 in the Level 5 Out of Age 15 years+.