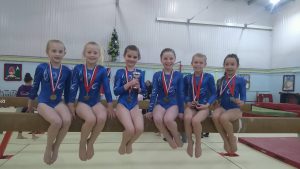 WWG’s West Country League gymnasts finished their 2016 season in style at the finals of the competition on 26th and 27th November.  A League gymnasts Tabitha Coleman, Jenna Caddy, Mya Brown, Leona Britton, Talia Brown and Mia Pardoe achieved third place out of 7 teams in the last match, earning them 3rd place overall out of those 7 teams for 2016. 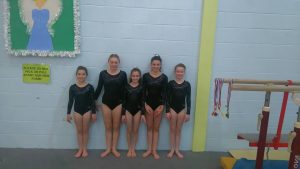 B Team Catherine Hall, Jessica Richardson, Hannah Ovens, Georgia Smith and Isabelle Kerbey came 4th out of 8 teams at the final and 5th out of 8 teams for the year.  These results are especially encouraging as both teams are young for the requirements of their respective leagues, and their final scores would have earned them medals in some of the higher divisions.  Special congratulations go to Tabitha Coleman, who placed third overall out of 39 gymnasts in Division 3 A League, and to Catherine Hall who came 1st overall out of 42 gymnasts in Division 3 B League.